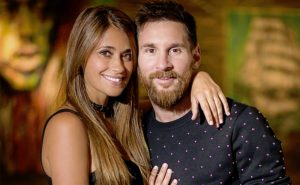 Antonella Roccuzzo is one of the hottest Sports WAGs in the World; after all she is the wife of Lionel Messi the Argentinean striker with Barcelona F.C. who despite what Real Madrid fans have to say about, Messi & CR7 are the best soccer players on the planet.

Lionel Messi has been considered by some distance not only the best active football player in the world but also one of the greatest of all time, alongside legends such as Maradona and Pelé. In addition to being awarded the prestigious Ballon d’Or prize a record five times, Leo has become the all-time top goalscorer for both Argentina’s national team and FC Barcelona, the mega-club he has helped to win more than 30 championships. While Messi is a household name across most of the globe, the superstar forward also surprises with his relatively low profile off the field.

Here are 6 Things You Didn’t Know About Antonella Roccuzzo:

You can check her out on Instagram here: https://www.instagram.com/antoroccuzzo88/

German midfielder Mesut Özil is regarded as one of soccer's best players; he rose to prominence during the 2010 FIFA World Cup and the Spanish club Real Madrid. In his 30's he has managed to establish … END_OF_DOCUMENT_TOKEN_TO_BE_REPLACED

Soccer star Andres Iniesta needs little introduction; the Spanish footballer is widely known to fans for playing for the Spanish national team and the Spanish club FC Barcelona. And since we know how … END_OF_DOCUMENT_TOKEN_TO_BE_REPLACED

Female soccer legend Abby Wambach needs little introduction; the professional soccer player is widely known to fans for playing for the U.S. women's soccer team. And since we know how much of a fan … END_OF_DOCUMENT_TOKEN_TO_BE_REPLACED