You are here: Home / Net Worth / Mesut Ozil Net Worth

What is Mesut Ozil Net Worth?

German midfielder Mesut Ozil is regarded as one of soccer’s best players; he rose to prominence during the 2010 FIFA World Cup and Real Madrid’s Spanish club. In his 30s he has managed to establish himself as one of Arsenal’s most important players.

Mesut Ozil began his professional soccer career with FC Schalke 04; he emerged as a star midfielder for SV Werder Bremen and the German national team during the 2010 FIFA World Cup. Özil parlayed his international success into a prominent role with Real Madrid before announcing his transfer to England’s Arsenal F.C. in 2013.

What ethnicity is Mesut Ozil?

Mesut Ozil was born on October 15, 1988, in Gelsenkirchen, Germany. He happens to be the grandson of a Turkish immigrant. 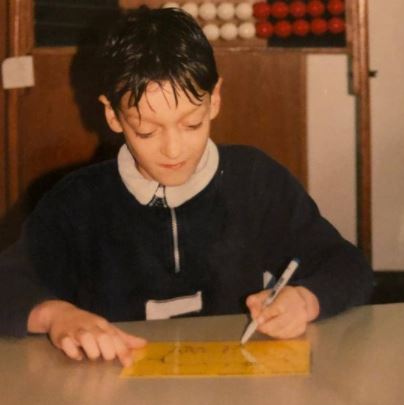 Mesut Ozil developed his soccer skills alongside friends in the Monkey Cage -a local pitch surrounded by fences. After playing for a series of smaller youth programs, he joined the pipeline of Gelsenkirchen’s FC Schalke 04 in 2005.

Ozil became a member of the Schalke senior team and the German junior national team in 2006.

In 2008, he was allowed to transfer to SV Werder Bremen, where he flourished and further polished his midfielder skills.

In 2009, he helped lift Werder Bremen to victories in the DFB Cup and DFL Supercup, thanks to his impeccable ball-control skills and creative passing. That same year he starred for Germany during the European Championship, earning Man of the Match honors for his goal and two assists in a resounding 4-0 finals victory over England.

In 2010 he was selected to the FIFA World Cup squad, where he displayed his remarkable all-around abilities.

In September 2013, Ozil made headlines with the announcement of his transfer to England’s Arsenal F.C.

In December 2019, Ozil took to social media to condemn China for its treatment of the Uighur people, a Muslim minority group in the country. 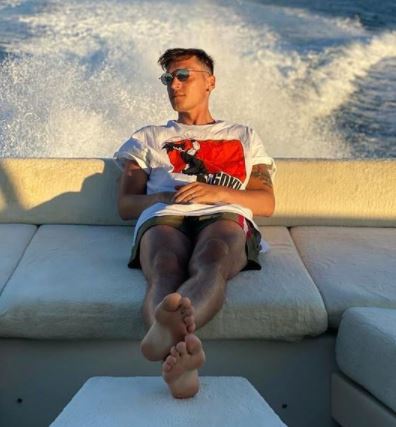 According to online sources, Mesut Ozil net worth has been estimated at $120 Million to date.

How much does Mesut Ozil make annually?

The soccer star makes as much as $24 million in a single year. Mesut Ozil’s current contract keeps him at Arsenal until 2021 and pays him an estimated $24 million annually.

He founded esports team M10 eSports in 2018, which competes in Fortnite and EA Sports FIFA competitions. 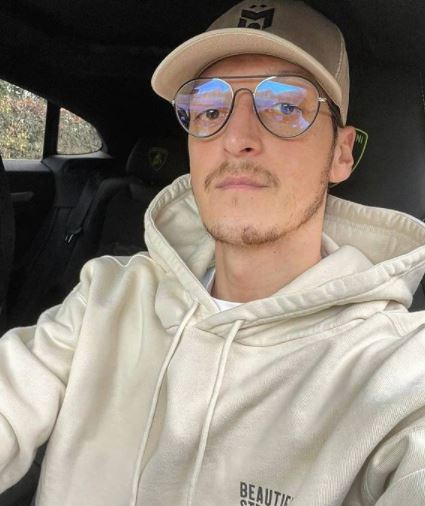 The German midfielder stands at 1.80 m and weighs approximately 76 kg.

Mesut is considered a well-rounded player with enough skill to create and finish goal-scoring opportunities. He plays as a creative attacking midfielder, although he can also play on the wing. Although he often acts as a playmaker, Ozil’s position is often complex to define. Some experts dubbed him a “false 10” because he tends to drift toward the wing as a central midfielder. 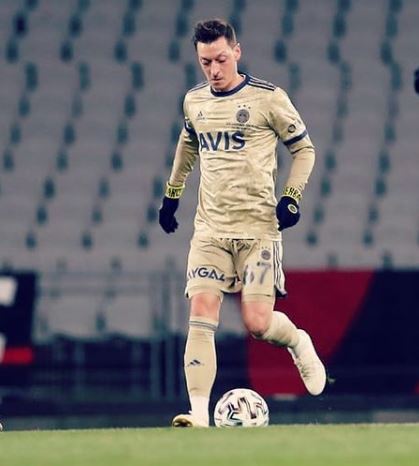 Ozil is also beyond playing as a striker, although he performs best when assisting other attackers. He often sets records in terms of assists.
Above all, Ozil is applaud for his unwavering intelligence, seeing opportunities that everyone else misses.
On the other end, Mesut has drawn criticism for his apparent lack of work rate and unwillingness to contribute to the defensive part of the gameplay. 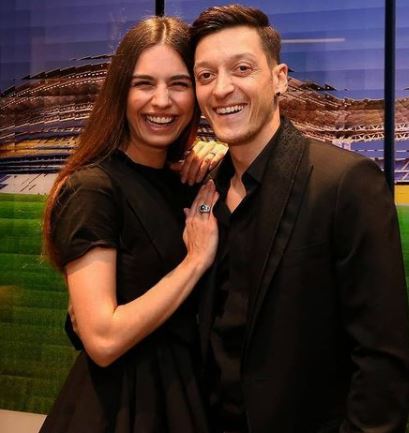 Gulse was crown Miss Turkey 2014 and later representing her country that same year in the Miss World beauty pageant.
However, she was originally born and raised in Gothenburg, Sweden, by an Iraqi Turkmen father and a Turkish mother.

The blue-eyed brunette then moved to Istanbul, where she began scoring regular model work.

In 2014, she got her big break – competing and winning the Miss Turkey pageant, which made her a star in her own country. Still modeling and shooting various fashion campaigns, the 5’10” stunner has also branched out into acting.
She starred in popular TV Asla Vazgeçmem – a drama about love in which she played the lead female role from 2015.

Gulse met Ozil that same year, and he was instantly smitten. Their romance had to be long-distance, with Gulse dividing her time between Istanbul and London for work commitments before he sealed a move to Turkey.
They made headlines after they were both caught up in a horrific knife attack the following month while sat in their car in London. Armed robbers targeted Ozil, Gulse, and Arsenal team-mate Sead Kolasinac.
But the left-back managed to fight them off before Ozil drove them all to a nearby restaurant, where they called the police.

Mesut Ozil and his wife Amine Gulse Ozil, are the proud parents of one child. The soccer couple welcomed daughter Eda Özil in February of 2020. 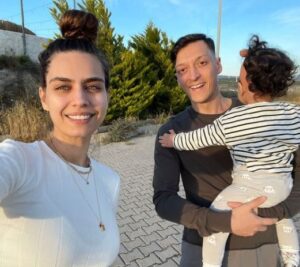 Mesut took to social media to announce the birth of his baby girl Eda as he posted a photo online saying how thankful he was that his baby daughter was healthy despite the coronavirus crisis. The proud daddy shared a photo of his new baby girl:

Thank God our daughter “Eda” was born healthy,” he tweeted.

Ozil became a member of the Schalke senior team and the German junior national team in 2006. Still, despite his promising talents, he was allowed to transfer to SV Werder Bremen in 2008. The midfielder flourished within his new club, with his impeccable ball-control skills and creative passing helping to lift Werder Bremen to victories in the 2009 DFB Cup and DFL Supercup. 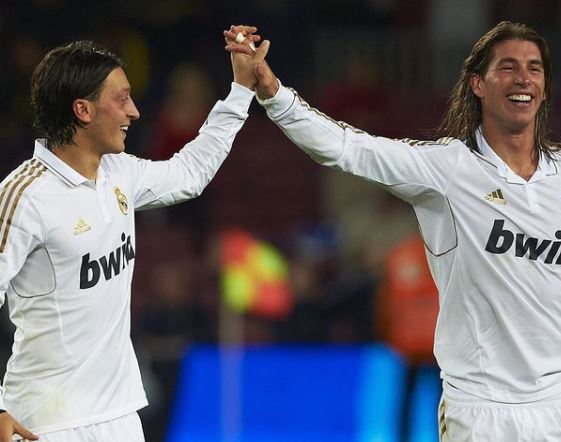 Ozil starred for Germany during the 2009 U-21 European Championship, earning Man of the Match honors for his goal and two assists in a resounding 4-0 finals victory over England. His ascent continued after he was selected to the 2010 FIFA World Cup squad, where he displayed his remarkable all-around abilities. Özil scored once and provided several assists to help Germany achieve a third-place finish, thus earning him a spot among the 10 nominees for the tournament’s Golden Ball Award.

The performance transformed Özil from a promising talent to a bona fide star. He was hailed as the “multi-kulti kicker” in Germany, celebrated for being the first national team player from an immigrant background to enjoy such international success. He also drew increased attention from several top European clubs. After transferring to Spain’s prestigious Real Madrid club in 2010, the midfielder teamed with scoring machine Cristiano Ronaldo to propel Real to a league title and victories in the Copa del Rey and Spanish Super Cup championships.

In September 2013, Ozil made headlines with the announcement of his transfer to England’s Arsenal F.C. The talented playmaker’s presence was expected to quickly vault Arsenal back into the ranks of the European elite.

How successful is Mesut Ozil? 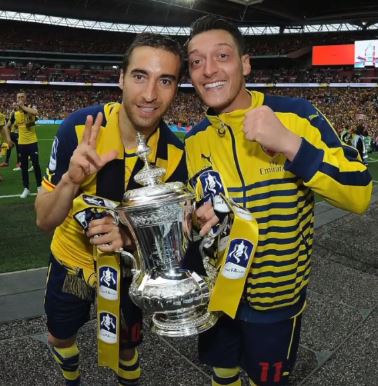 At 32, Ozil is considered one of the most creative and intelligent players in world football; and he has excelled at both the club and international level.
Since starting his career in the German Bundesliga. Mesut has played for world-renowned clubs, including Real Madrid; before transferring to Arsenal.

I always have the motivation, particularly before the games – I want to win all the games and I hate to lose, even in training I am p****d and aggressive because I always want to win.”

“Of course, we need time to understand everything completely but it is going well – he is a very good coach and as a player; you can speak to him and he listens which makes everything easier for us.”

“We are fourth in the table so we know we can achieve more and I need to show on the pitch my potential to help the team but I think so far it is going well, especially with the goals.”

Where does Mesut Ozil live?

In 2016, Mesut completed a 10-million-pound purchase of a home in North London.
After acquiring the six-bedroom, three-story home, Mesut made several renovations. He imported marble from Turkey to decorate his living room, and he created a home theater to play hours of the video game FIFA.

What does Mesut Ozil do now?

Mesut Ozil’s current contract keeps him at Arsenal until 2021.

Where can I find Mesut Ozil

Mesut stays active on social media; where he is massively popular on some of the most common and popular platforms, including:

He is popular on Instagram, where he has over 23 million followers.

Would you also like to know what is Abby Wambach’s Net Worth?

What is Mesut Ozil Net Worth? German midfielder Mesut Ozil is regarded as one of soccer's best players; he rose to prominence during the 2010 FIFA World Cup and Real Madrid's Spanish club. In his 30s … END_OF_DOCUMENT_TOKEN_TO_BE_REPLACED

Female soccer legend Abby Wambach needs little introduction; the professional soccer player is widely known to fans for playing for the U.S. women's soccer team. And since we know how much of a fan … END_OF_DOCUMENT_TOKEN_TO_BE_REPLACED